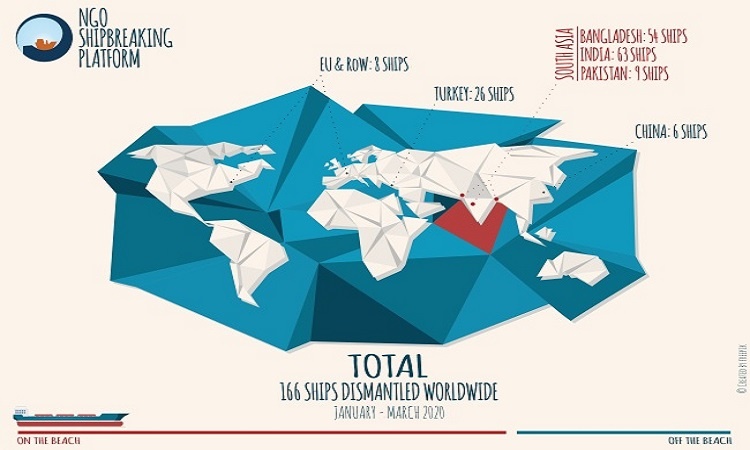 There were a total of 166 ships broken in the first quarter of 2020. Of these, 126 ships were sold to the beaches of South Asia for dirty and dangerous breaking . Between January and March, at least 4 workers have lost their lives and at least 7 were severely injured when breaking ships in Bangladesh.

On February 3, Liton Das was hit by a falling iron plate on his right leg at the Bangladeshi M.M. shipbreaking yard. Liton currently lies in his bed at home with an open wound at high risk of infection.

On February 4, cutter man Kiron Tripura died at Ziri Subedar shipbreaking yard. A week later, Md. Mizanur Rahman fell from great height whilst dismantling the vessel Anangel Hali, owned by Greek Angelicoussis Shipping Group, at S.N. Corporation yard. Mizanur died on the spot. He had started to work as a shipbreaker only four days prior his death.

On March 24, two brothers, Sumon Das and Nironjon Das, died when breathing toxic gas, while working in the engine room of the tanker West Energy, owned by South Korean company Sinokor. The vessel was beached at Kabir Steel’s Khawja shipbreaking yard. Sumon and Nironjon leave five children behind. In the same accident, two other workers, Kawser and Habib, were also exposed to the toxic gas and fell sick. The Department of Inspection for Factories Establishments (DIFE) stated to local media that the accident will be investigated.

Accident records in Gadani, Pakistan and Alang, India, are extremely difficult to obtain. A recent BBC Disclosure report reveals how companies involved, as well as Indian local authorities, seek to thwart public scrutiny of the deplorable conditions in Alang. Also other journalists that have visited the Indian shipbreaking yards, often unannounced and undercover, have documented a reality that starkly contrasts with the industry efforts to greenwash the beaching of vessels for breaking. Workers risk their lives due to lack of infrastructure and dangerous conditions. They are furthermore not provided adequate respiratory protective gear and thus exposed to hazardous materials and gases that impair their health, causing cancer and other respiratory diseases. The death toll caused by occupational diseases contracted at the beaching yards is not disclosed in either India, Pakistan or Bangladesh, and is likely to be shockingly high.

In the first quarter of 2020, Saudi Arabian owners sold the most ships to South Asian yards, followed by South Korean and Greek owners. Shipping company Berge Bulk sent five vessels to Bangladesh for dirty and dangerous breaking. These add up to the four ships that the ship owner sold to the same beach last year. Berge Bulk’s scrapping practices should prompt the Lloyd’s List Asia Awards to withdraw the prize for “Excellence in Environmental Management” the company recently received for its commitment to environmental conservation. Indeed, there is nothing laudable about putting workers lives at serious risk and polluting sensitive coastal environments.

Almost half of the ships sold to South Asia this quarter changed flag to the registries of Comoros, Gabon, Palau and St. Kitts and Nevis just weeks before hitting the beach. These flags are not typically used during the operational life of ships and offer ‘last voyage registration’ discounts. They are particularly popular with the middlemen that purchase vessels cash from ship owners, and are grey- and black-listed shipping registries due to their poor implementation of international maritime law.

The high number of flag changes at end-of-life seriously compromises the effectiveness of legislation based on flag state jurisdiction only, such as the European Union (EU) Ship Recycling Regulation. The Platform recorded at least six ships that de-registered from an European flag registry prior the last voyage to South Asia in order to circumvent EU legislation.

As reported by the newspaper The Indian Express, migrant workers in Alang, unable to return to their home villages, are facing serious financial difficulties. They are yet to receive their March salaries and have not received any alternative support, such as food, from their employers. Fortunately, media report that the Gujarat government has now stepped in and distributed thousands of ration kits to the migrant workforce stuck in Alang.

According to IndustriALL Global Union, more than 400 food bags were handed out to the National Trade Union Federation and the Shipbreaking Workers Union in Pakistan.

In Bangladesh, according to the Platform’s member organisation YPSA, only local workers are partially receiving food support from the government and from some yard owners. Migrant workers, on the other hand, have not received any public support. YPSA and OSHE, another Platform member organisation active in the Chattogram area, are currently providing assistance to part of the migrant workforce. There is a dire need to secure emergency food assistance, as well as medical check-ups and awareness raising to avoid the spread of Covid-19.
Source: NGO Shipbreaking Platform