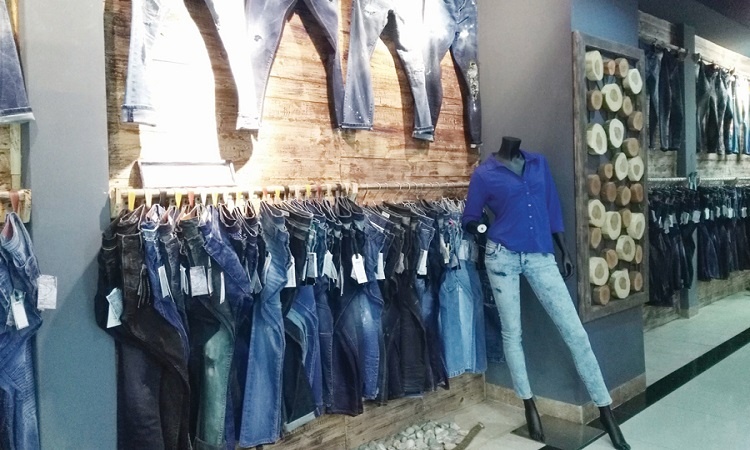 Bangladesh outperformed Mexico and China to become the largest denim exporter to the United States in the first half of this year though export proceeds dropped from a year-ago period owing to the Covid-19 pandemic.

Industry insiders have said Mexico and China have lost more than half of their exports to the US market during the period, which helped Bangladesh reach the first place.

They expect that Bangladesh will keep its top position in the US as the two major suppliers have been facing some challenges. 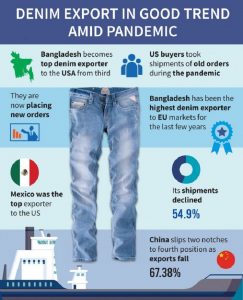 Bangladesh has been the prime denim exporter to European Union markets for the last few years.

The business situation might be better in the second half of the year with most EU buyers coming back to markets as most clothing stores have reopened ignoring a potential threat of a second wave of Covid-19.

Bangladesh’s denim exporters will get more access to the US market in the coming days, but Vietnam and Cambodia might get more benefits, said Syed M Tanvir, director at Pacific Jeans Ltd, a Chattogram-based denim exporter.

Mexico and China lost their positions in the US market because of the US government’s political intervention, he added.

“US buyers continued sourcing products from Bangladesh till June though most clothing stores were closed with the pandemic situation taking a serious turn in the country,” said a top official at a leading denim textile mill.

A number of US brands and retailers have filed for bankruptcy and cancelled their orders across the world. That is why their imports have dropped. However, Bangladesh’s denim exports to the country have, comparatively, been less affected.

“Some products got stuck during the pandemic and later US buyers received them. They are now also placing new orders though the country’s Covid-19 situation is worse than in the EU,” he added.

“We have received a good response from buyers, but it is not like what we got in the same period last year. We hope the business situation will improve in the next half of the year,” he added.

According to data from Commerce Department’s Office of Textiles and Apparel (Otexa) in the United States, Bangladesh’s denim exports to the US market fell by 23.03 percent to $190.14 million in the first half of 2020 – from $247.82 million in the corresponding period of 2019.

The US total imports of denim items have also fallen by 37.82 percent to $1,083 million during the first six months of this year from $1,741.82 million in the same period last year.

“Denim imports have been hit hard – just like every other type of apparel – by the collapse in trade and retail in response to the global pandemic,” said Julia Hughes, president at the United States Fashion Industry Association, the Sourcing Journal, an international media company, reported.

Hughes said countries with a growing share of US denim imports are mainly Asian suppliers.

“Vietnam and Cambodia, in particular, are selling more denim items to the US today,” Hughes added.

Mexico, the prime denim exporter, went down to second place due to a recent agreement among the US, Canada and Mexico.

Vietnam, another Asian denim exporting country, moved down to the third position on the US market and the country was able to gain 0.67 percent growth among the top ten suppliers during the first half of the year.

The value of Vietnam’s denim exports was $143.57 million during the period, which was $142.61 million in the same period last year.

Chinese denim exports were disrupted in the first six months of the year due to the pandemic. Additionally, the ongoing trade war affected them significantly. As a result, the once second largest denim supplier to the US market fell to fourth place.

According to an Otexa report, Cambodian denim exports registered nearly 40 percent growth to $64.03 million in the period from $45.89 million in the same period last year.