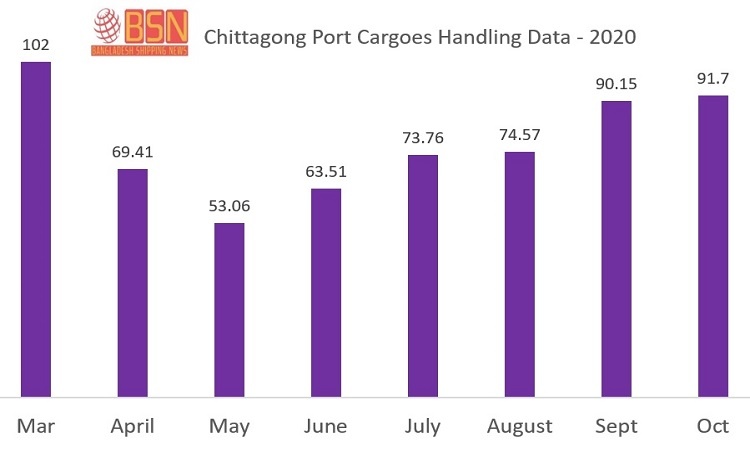 Cargo handling at Ctg port resized up. Data from Chattogram Port Authority showed that October’s handling volume was the highest since April. In March, a total of 102 Lakh tonnes  of import and export cargoes were handled by the port. In October the total reached at 91.7 Lakh tonnes.

The trade had started experiencing a decline since January after the coronavirus disease was reported in China, slowing cargo handling by the port. It slightly improved in March after Chinese factories and ports opened in late February.

But when the virus spread through Europe and the US, which are major destinations of Bangladesh’s garment exports, the merchandise shipment crashed down in March.

The biggest blows to trade Bangladesh carries out with countries around the globe came in April and May.

But with the reopening of the economy, businesses and industrial units from June, the two-way trade began growing again, as evidenced by the cargo handling at the port in the first four months of the fiscal year.

The transport of import cargoes through the port climbed during the period.

Exports are mainly carried out through containerized cargoes, and 5.02 lakh tones of products were shipped abroad in October.

Ninety-two per cent of the country’s import and export cargoes are transported through the Cartogram port.