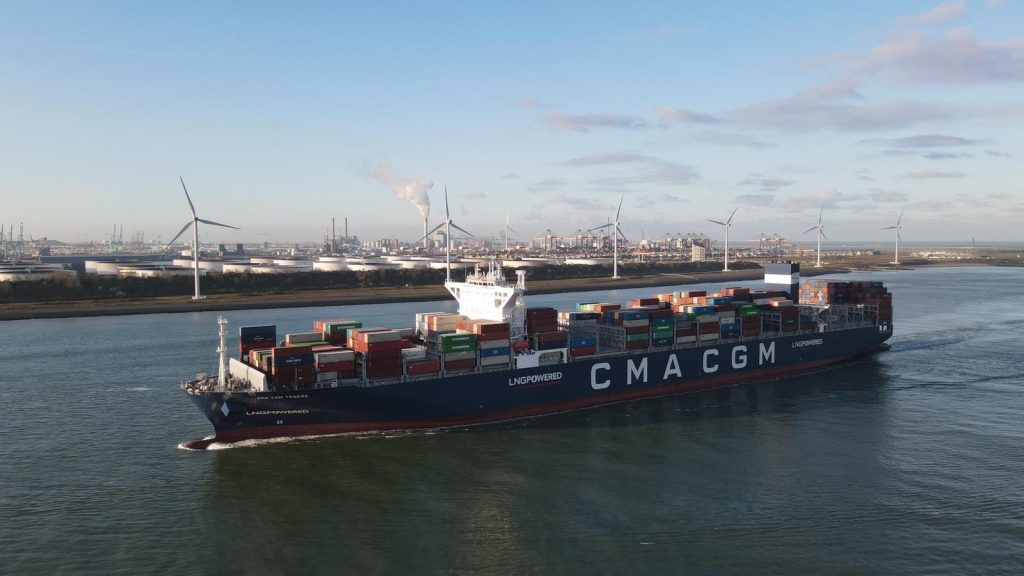 CMA CGM has announced the first liquefied natural gas (LNG) bunkering of its 15,000TEU vessel, CMA CGM Tenere, in the port of Rotterdam.

The French energy company, Total has delivered LNG with the world’s largest LNG bunker vessel, the Gas Agility, which has supplied CMA CGM Tenere with 12,000m3 of LNG.

Concurrently, the container ship was carrying out cargo handling operations. After the bunkering, the boxhsip will join the CMA CGM’s Asia Line (FAL 1) connecting Asia with Europe.

In November 2017, Rodolphe Saadé, chairman and CEO of the CMA CGM Group, decided to equip the company’s nine 23,000TEU container ships with LNG engines, which was the first attempt in the shipping industry for vessels of this size.

LNG is currently the industry’s best method for preserving air quality, according to CMA CGM, as it exceeds current regulatory requirements, cutting emissions of sulphur oxides and fine particles by 99% and of nitrogen oxides by 85%.

“An LNG vessel emits up to 20% less CO2 compared with a vessel powered by fuel oil, while LNG technology is one of the first steps that the CMA CGM Group is taking towards its target of achieving carbon neutrality by 2050,” the Marseille-based shipping firm added in its announcement.

CMA CGM Tenere was delivered on 15 September and its five sister ships are being built by Hyundai Samho Heavy Industries for Eastern Pacific Shipping. CMA CGM said they will be all delivered until the end of 2022 and will join the Group’s flagship, CMA CGM Jacques Saade, the world’s largest LNG-powered container ship, which is expected to complete its first bunkering in Rotterdam on 12 November.

Moreover, the Group has formed a major industrial partnership with Total to supply LNG for these ships, while CMA CGM has announced it is therefore driving the creation of a genuine excellence centre for the use of LNG in the shipping industry.