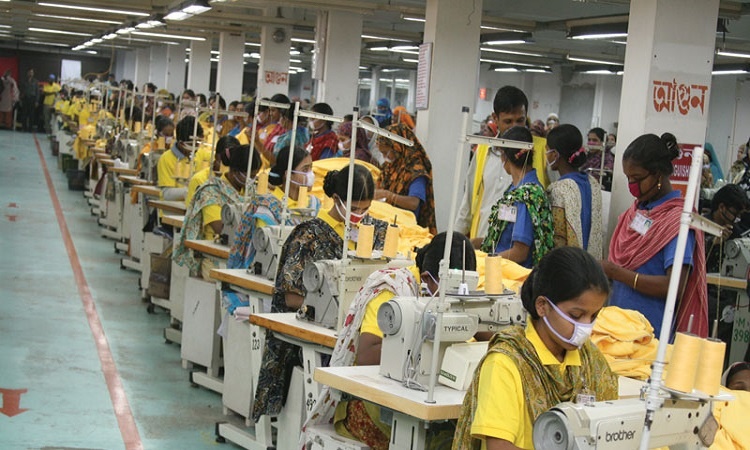 The country’s export earnings in July and August, the first two months of the current financial year 2020-21, grew by 2.17 per cent to $6.88 billion from $6.73 billion in the same period of FY20 as global businesses hit by the COVID19 pandemic started to rebound slowly.

Experts and exporters said that the export earnings had returned to a positive trend with the revival of work orders which had been suspended or halted by global fashion brands due to the coronavirus outbreak.

The country’s export earnings in August this year increased by 4.32 per cent to $2.96 billion from $2.84 billion in the same month of last year, according to the provisional data of the Export Promotion Bureau to be released on Sunday.

‘A major portion of RMG export in August has come from the orders that were halted in March-May due to the pandemic and in September, some of halted orders would be processed,’ Policy Research Institute of Bangladesh executive director Ahsan H Mansur told New Age on Thursday.

He said that Bangladesh’s export earnings still remained at suboptimal level although it was improving.

Mansur hoped that it might take till January-February next year for normalcy to return in the export situation as the global market was recovering slowly.

Export earnings from RMG in the first two months of FY21 decreased by 0.06 per cent to $5.71 billion.

Earnings from woven garments plunged by 7.06 per cent to $2.6 billion in July-August of FY21 from $2.79 billion in the same period of the last fiscal year.

Earlier, data from the Bangladesh Garment Manufacturers and Exporters Association showed that RMG export in August this year had increased by 45 per cent, which is much higher than the EPB estimation.

When asked about it, BGMEA president Rubana Huq said that the differences between the BGMEA and EPB data were absurd as the chamber had based its estimates on data from the National Board of Revenue portal.

‘I think either the NBR’s database has some issues or the EPB data is flawed. As we examined the NBR data, it showed product by product export and growth and there is no scope for manipulation at such detail level,’ she said.

She said, ‘We are really confused about which one is true. But we have the data downloaded from the NBR in raw format to prove where we got them from.’

Export earnings from leather-footwear decreased by 11.89 per cent to $105.23 million while other leather products fetched $34.02 million with a 22.94-per cent negative growth in the period.