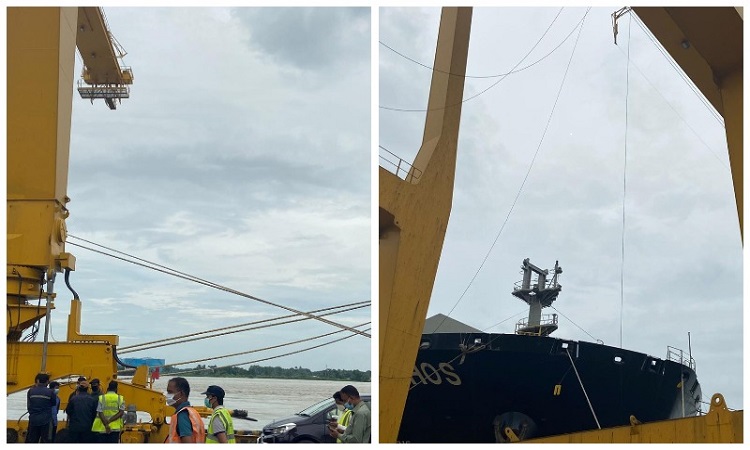 The key gantry crane used in loading and unloading goods at a jetty at the New Mooring Container Terminal (NCT) at Chittagong Port has broken down. The accident took place at 12:15 pm on Thursday when the cargo container ship ‘Mount Cameron’ was landing at the jetty. The key gantry crane is obsolete, though it does not damage the ship; As a result, unloading of goods from ships at NCT-2 jetty of the port has been stopped.

Confirming the matter, Chittagong Port Secretary Omar Farooq told Kaler Kanth that the front part of the key gantry crane number eight in the port’s NCT was damaged due to the collision of the ship. A team of port engineers is working to find out how much and how much has been damaged. Mr. Chairman of the Port, senior officials including members have visited the spot. An investigation committee has been formed headed by the port dock master. The next step will be taken after their report. He said the key gantry crane at NCT’s jetty that was damaged is currently closed; However, goods are being unloaded from the ship with the other two cranes.

It is learned that a pilot of the port was bringing a ship from the outer anchorage to land at the NCT-5 jetty of the port. The container ship collided with the key gantry crane of the NCT-2 jetty while rotating Mount Cameron before the jetty crowded at high tide. This damaged the port’s gantry crane. The ship was then anchored at the designated NCT-5 jetty. The loading and unloading of goods from the ship at NCT-2 jetty has been stopped since the accident.

It may be mentioned that there are a total of five jetties in the NCT terminal, out of which one jetty is allotted for loading and unloading of goods at the Pangaon terminal in Dhaka. The remaining four jetties are used for lifting goods with six gantry cranes. By adding four new gantry cranes to the NCT, the movement of goods has started from August 25, 2019.