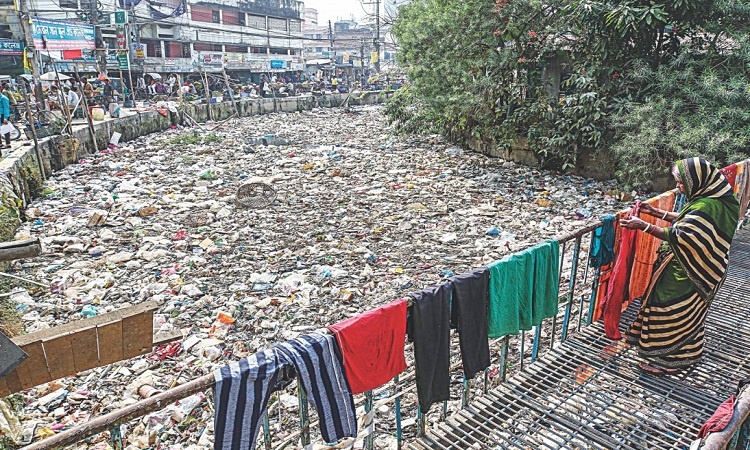 Karnaphuli dredging paralyzed by plastic. It was supposed to take less than two years to dredge the Karnaphuli river to improve the navigability of the Chattogram port channel. Ten years down the road, the project is still unfinished.

Repeated failure to meet deadlines by the first contractor, some legal complications and a five-year pause in work have hamstrung the project.

In the meantime, a huge amount of plastic waste – mostly bottles and polyethylene bags – along with other types of waste have accumulated on the riverbed making dredging a lot difficult now.

Navigation in the channel connected to the port is now getting impeded, eventually affecting maritime trade.

Only 39% of the Karnaphuli dredging work has been done so far.

As there is no sewerage system of the Water Supply and Sewerage Authority (Wasa) in Chattogram city, wastes of about 60 lakh city residents discharge into the Karnaphuli through 36 canals.

According to Chattogram Wasa, about three lakh litres of household waste and hundreds of tons of industrial chemicals make their way into the river every day.

According to the Chattogram River and Canal Protection Committee, about 10 lakh tonnes of sediment are discharged into the river every day during the rainy season.

Human waste, plastic, polyethylene and silt have created a layer on the river bed ranging between two and 10 metres, making dredging difficult.

Ninety-two percent of the country’s import and export are done through Chattogram port. The jetties, yard and other installations of this port are located on the banks of the Karnaphuli.

Mohammad Idris Ali, a river expert and professor at Haji Mohammad Mohsin College in Chattogram, said waste and polyethylene go directly into the river due to a lack of waste management or sewerage management in the city. As a result, even if dredging is done, these wastes will refill the riverbed in a short time.

First, the city has to be brought under a sewerage system. Secondly, plastic products must not be allowed to flow into the river in any way, he added.

Chief Hydrographer of the Chattogram Port Authority (CPA) M Arifur Rahman, also the project director, said the navigability of the River Karnaphuli is hazardous because of plastic waste. Chattogram port’s jetty-1 became unusable eight years ago because of heavy siltation.

Besides, out of the port’s remaining 16 jetties, six jetties have capacity to host ships of 9.5 metres draft. The rest have navigability crises. The depth of these jetties comes down to 7 to 8 metres. Constant dredging is needed for ships berthing at the jetties, he added.

Ships can be moored at the jetties after unloading some goods at the outer anchorage, thus reducing draft. This adds to the time of unloading. Had all the jetties been fully operational, the port’s efficiency would have been enhanced manyfold.

Arifur Rahman further said earlier the Malaysian contractor had filed a case against the port authorities over its contract cancellation prior to the project completion. The case has not been settled yet.

Mohammad Saiful Islam, project manager of E-Engineering Ltd, the company engaged in the Karnaphuli dredging work, told The Business Standard that the biggest hurdle is a deep layer of wastes. They cannot dredge the riverbed up properly due to various wastes, including polyethylene, plastic, iron and wood pieces.

“At present, excavation work is going on with only a dredger. We continue our efforts to complete the project within the rescheduled time,” he added.

The port authorities now struggle to dock ships at the jetties with the dredging project going slow.

Mahbubul Alam, president of the Chittagong Chamber of Commerce and Industry, said the Chattogram port will become unusable if the Karnaphuli is filled up with plastic waste and silt. There is no alternative to keep dredging to keep the port running.

In April 2011, the CPA appointed a contractor, Malaysian Maritime and Dredging Corporation, to finish the Tk229 crore capital dredging project within the next 20 months.

But the contractor failed to show any satisfactory progress despite the CPA’s extension of the January 2013 deadline several times.

Eventually, the port Authority cancelled the agreement with the contractor in 2014, resulting in a five-year stoppage of capital dredging arising out of legal issues.

In the meantime, the riverbed filled up again with silt, plastic waste, and other discarded items.

After a long pause, the CPA signed a deal with the Bangladesh Navy to implement the “Sadarghat to Bakaliar Char Dredging” project. The E-Engineering Ltd, a concern of Saif Power Group, under the supervision of Bangladesh Navy began the dredging in September, 2018.

Meanwhile, the capital dredging project cost increased by Tk63 crore to Tk321 crore and its implementation deadline was also extended by one year to June 2022 from June 2021.

The CPA revised the project as its work is being affected by wastes.

The revised development project proposal was approved at an inter-ministerial meeting on 12 January. It will be finalised soon at the Executive Committee of the National Economic Council meeting, according to the CPA.

The project cost has gone up as the removal of increased wastes in the riverbed will need more funds, project director M Arifur Rahman said.

Experts say the dredging project will not be of any use unless the dumping of wastes into the Karnaphuli is stopped.

One thought on “Karnaphuli dredging paralyzed by plastic”