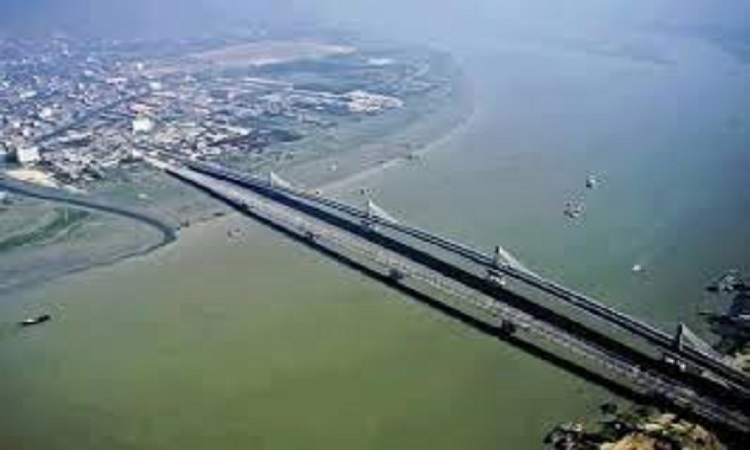 Karnaphuli River has shrunk to 410 metres from 866 metres in width. According to a recent survey carried out by Chattogram Nodi O Khal Raksha Andolon.The Karnaphuli River which is known as the lifeline of Chittagong.

The Nodi O Khal Raksha Andolon has surveyed the width of the river from Shah Amanat Bridge to Firingibazar Monohorkhali over the last three weeks and presented the report at Chittagong Press Club on Monday.

According to Bangladesh Survey (BS), the river had a width of 866.16 metres. However, it has now shrunk to 410 metres at Shah Amanat Bridge point.

A huge amount of sediment has accumulated at the estuaries of Chaktai and Rajakhali canals since the Chittagong Port Authority (CPA) has not excavated the river, the survey states.

No boat can navigate through the spots where sediment has been deposited. As a result, waterlogging has extended from Chaktai to Bahadderhat areas of the city, the survey report pointed out.

The Asian Development Bank (ADB) and the CPA jointly undertook a project and formulated a plan, entitled ‘Strategic Master Plan for Chittagong Port’, in 2014 for the conservation of the river.

There was no alternative to implementing the project to increase the navigability of the river, according to the survey.

However, the CPA is leasing out the river to different enterprises at whim, disregarding the plan.

The free flow of the river has been obstructed as the excavation has not been done by the CPA, according to the report.

The survey also found that strong currents were created during high tide and low tide as sediment had deposited at the northern side of the river. The strong current renders the Shah Amanat Bridge vulnerable.

Aliur Rahman presented the report at the press conference.