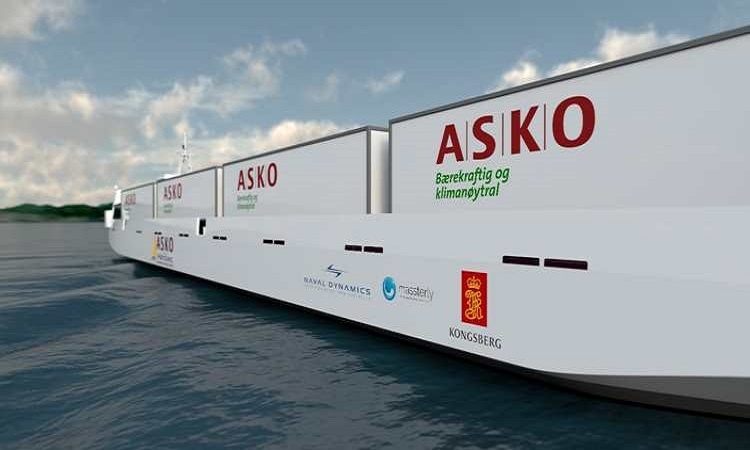 Kongsberg Maritime and Massterly (a Kongsberg Wilhelmsen joint venture) have signed contracts with the leading Norwegian grocery distributor ASKO to equip two new vessels with autonomous technology, and to manage their operations at sea.

With Norwegian companies delivering around 60% of the investment, this is a major milestone for the growth of sustainable maritime operations in Norway. The fully electric ships will replace 2 million kilometres of truck transport, saving 5,000 tonnes of CO2 every year.

Wilhelmsen Group will be the first ship management company to operate unmanned vessels for commercial use and the chief executive of the group, Thomas Wilhelmsen, stated, “Now we are one step closer to our goal of enabling sustainable trade: through cost-effective, safe, and environmentally-friendly logistics.”

ASKO – currently transporting their cargo by more than 800 trucks daily – is committed to sustainability and is investing heavily in new technologies such as electric and hydrogen-powered vehicles.

ASKO aims to become “self-sufficient provider of clean energy and to have 100% emission-free transport by 2026,” according to Kai Just Olsen, ASKO Maritime director.

At present, road transport is the single mode of transportation to link ASKO’s warehouses on the western side of the Oslo fjord with their distribution centre on the eastern side. The new RORO (Roll on, Roll off) vessels will replace the current solution with a zero emission transport alternative.

“Fully electric trucks will take the cargo between the warehouses and the ports of Moss and Horten, and in shipments of 16 the trailers will be transported across the fjord on the battery-driven vessels,” Olsen added.

ENOVA has supported the project – including the required port infrastructure – with approxmately US$13 million, in line with the Norwegian society’s commitment to reduce emissions and transfer transport from road to sea where feasible.

The vessels will be equipped with the technology required for zero emission and unmanned operation by Kongsberg Maritime, while Massterly will ensure ship management and safe operations from their shore-based Remote Operations Centre. The two vessels will initially operate with a reduced crew, before moving towards unmanned voyages.

Egil Haugsdal, president of Kongsberg Maritime, believes that this kind of project is the centric point of the creation of Massterly

Since the ASKO operation lies within Norway’s coastal jurisdiction, the Norwegian Maritime Authorities (NMA) must be satisfied that a sufficient level of safety has been achieved before they will issue an approval of operation for these vessels. NMA will therefore follow the project through a detailed risk assessment, based on IMO 1455 guidelines with regards to equivalent and alternative designs, new technology, verification, and approval for operation. DNV GL will also support this process as an independent third party.

The vessels, which are due to be delivered early in 2022, have been designed by Norwegian vessel designer Naval Dynamics and will be constructed at the state-owned Cochin Shipyard in India. The functionality enabling autonomous operation will be implemented and tested after arrival in the operational area in the Oslo fjord.