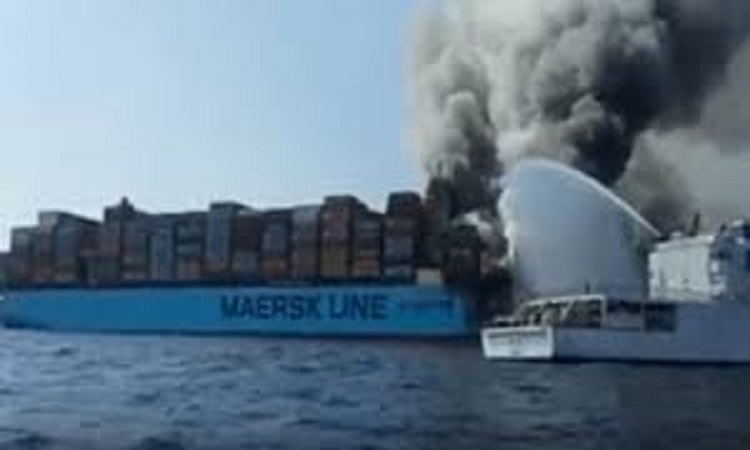 Maersk Honam were insufficient to combat the fire and the regulations governing the stowage of dangerous goods contributed to the fire on the vessel in March 2018 that saw the death of five crew.

Singapore’s Transport Safety Investigation Bureau (TSIB) at the Ministry of Transport, on 21 October, released its final report into the Maersk Honam fire which occurred in March 2018, which concluded that the causes of the initial ignition of the cargo may never be known.

The vessel Maersk Honam is a modern 15,000TEU container ship delivered some months earlier on 31 August 2017, had left Singapore after loading boxes, crucially 204 containers into cargo hold number 3, where the fire was to first break out.

According to the report much of the evidence into the causes of the fire was destroyed so it is “it is not possible to conclusively determine the cause of the fire.”

However, the master of the Maersk Honam reported that there was a smell of chlorine, as he made his way to the bridge from his cabin, but he could not see any smoke at around 19:50hours. Amongst the cargo loaded onboard, the cargo within bay 3 included a container of Sodium Dichloroisocyanurate Dihydrate (SDID) – which is classified under Class 9 in the International Maritime Dangerous Goods (IMDG) Code. Class 9 is a coverall class, effectively it SDID is registered under the miscellaneous section.

SDID contains a chlorine content of 56% and it is this that is thought to have been the cause of the chlorine smells reported by a number of crew.

In its conclusions the TSIB said, “The investigation revealed that the secondary hazards of chemical decomposition/ instability of SDID had not been identified in the IMDG4 Code. This is because SDID was classified under Class 9 in the IMDG Code, instead of the more stringent Class 5.1 (oxidising substances), despite having similar chemical properties as those in Class 5.1.”

The report went on to say that, “The special provisions (SP135) within the IMDG Code allows for the classification and carriage of SDID under Class 9 (UN No.3077), thus not recognising the potential thermal instability of this material, possibly as a result of legacy carriage requirements recognised nearly 40 years prior. As a result, despite these secondary hazards, SDID was stowed under-deck where the main means of fixed firefighting in this area was CO2, which was ineffective to tackle fires associated with such materials.”

Captain Amarinder Singh Brar, a former container ship master and now an Associate with London Offshore Consultants told that “If applicable, the SP’s, or special provisions within the IMDG Code, are listed against each entry of dangerous cargo. More often than not, an SP exempts the dangerous goods from more stringent requirements if it meets certain criteria – effectively defeating the very purpose why the cargo was listed as a dangerous good in the first place. This is a legacy of how maritime conventions and codes are discussed and approved at IMO.”

What is more, Captain Brar noted that SDID, while being classified as a Miscellaneous Hazard under Class 9, it in fact has an alternative ‘aquatic toxin hazard’ identified in the investigation report. “It is effectively a marine pollutant which is not easily identifiable from the IMDG Code. A marine pollutant should have the letter P listed in column 4 which is missing is absent for SDID if listed as UN No. 3077,” added Captain Brar.

who was a presenter at the recent Container News webinar along with the International Maritime Organization (IMO)’s Bingbing Song, who told the audience in that event that the IMO’s Marine Safety Committee, which was due to meet in the spring, will be considering the classification of some chemicals in its online meeting due to take place late October and early November.

Acknowledging the gap in the regulations, the report added, “Noting the secondary hazards presented by SDID, which are not captured in the current provisions of the IMDG Code, the provisions in the IMDG Code would need to be reviewed. In the interim, appropriate measures, similar to those adopted for calcium hypochlorite as identified by CINS could be considered for adoption.”

In addition to the inadequate regulations regarding stowage the Singapore investigation found that SDID as an oxidiser “required the use of abundant water, which could not have been achieved promptly, given the existing statutory requirements for firefighting measures for container fires under-deck.”

Recognizing the inadequacy of the mandated firefighting equipment on board modern container ships, Captain Brar had highlighted this problem at the Container News webinar and at earlier events in 2019, saying that the regulations were over 30 years out of date for the latest generation of containerships.

Investigators urged the, “Adoption of standards/ guidance like those prepared by ABS and DNV-GL, as a risk-mitigating measure, should be considered. Regardless of amendments to the statutory requirements, dangerous goods with oxidising properties such as SDID should be considered for stowage on-deck, away from direct sunlight, where water could be used more effectively.”

This was a conclusion reached by MSC subsequent to its own vessel catastrophe in 2012, on the MSC Flaminia, which saw the deaths of three crew, and led to the development of the Gülsün class of vessels, whose firefighting equipment far exceeds current regulations, with heat and smoke detectors, the ability to flood cargo holds and fire hoses stationed high above deck on the accommodation infrastructure.

In the second of three webinars, due at 2pm on 22 October, speakers who will include MSC’s Laurent Audaz, Head of Insurance, Legal and Claims, will discuss the recent landmark Flaminia ruling, while Captain Zadok Radecker, Head of Special Cargoes, Sustainability and Cargo Security will present on ZimGuard a system for identifying misdeclared and non-declared hazardous cargo.

Again the Singapore investigators into the Maersk Honam  fire are in tune with the current industry mood, “Robust screening processes for booking of cargo are key to minimise the misdeclaration as well as to plug loopholes, which put the ship, its crew, and the cargo at risk, such as having technological means to be able to extract certain key properties of cargo declared to be shipped.”

You can register for the Second Cargo Integrity Seminar here.