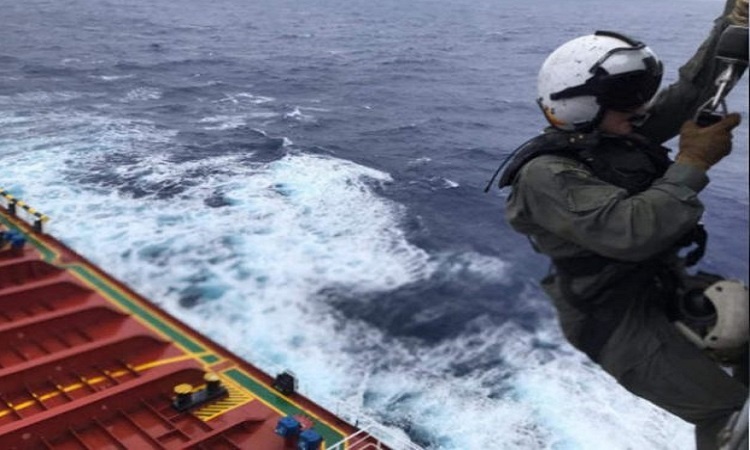 Maritime sector Is out of step?. Global warming is a ticking time-bomb that could destroy us all or it could be a dud, failing to explode at the expected time. For most climate change must be dealt with and in shipping that is the general view, but the route to climate redemption remains unclear, as was clearly understood at this week’s debate at the IMO. Container News’ Nick Savvides argues that the industry may, as a result, have missed an important opportunity.

Time is a wonderous thing, timing is, apparently everything, at least in comedy. It is hard to know whether the virtual meeting of the International Maritime Organization (IMO)’s  Marine Environment Protection Committee (MEPC) 75 had descended into farce or was the sensible outcome of those guided by the technological nous and the will to slalom through the political minefield.

What is clear is that many of those in the shipping industry are distancing themselves from the increasingly angst-ridden interventions form those environmental organizations who’s job it is to pressure government and industries to meet their climate obligations.

Growing fissures between member states and the non-governmental organizations (NGOs), if not surprising, may well become a chasm over the coming decade, or even the next three years.

Listening to the debate from within the IMO virtual bubble it was clear that the dichotomy between the industry and environmentalists could only be applied loosely. Discussions over the short-term measures centered around meeting the IMO’s own Initial Strategy, that of a 30% cut in emissions by 2030 and a 50% reduction by 2050 when compared to carbon emissions from 2008.

More progressive voices, for want of a better term, suggested that the maritime sector had a commitment to meet the Paris Agreement goals, keeping global warming to 1.5deg Celsius or below, and to do that decarbonization needed to move at a far greater pace, given that the major assets in shipping and the general infrastructure will remain in service well beyond the first deadline, and in some instances up to and beyond the second target.

Approval of the IMO’s Fourth Greenhouse Gas (GHG) study by MEPC, which was published in late July, highlighted the growing problem in Maritime sector. It showed that emissions from the maritime sector had increased virtually 10% from 2012 to 2018, mainly due to an increase in demand from economic growth.

“I think this result is not surprising – even with modest trade growth, it’s easy for ‘demand’ for shipping to grow faster than market driven increases in efficiency reduce the fleet’s average carbon intensity,” one of the authors of the study told Container News.

Asked if this was disappointing, the scientist chided yours truly, “If there is disappointment, it is probably from an ill-informed expectation. It just remains clear, that we have to acknowledge that shipping has many reasons to get a move on with its decarbonization:- trade is growing and expected to continue to grow, only strong regulation and rapid movement away from fossil fuels has any chance of achieving emission reductions.”

What then does this mean in practice? “That means a strong IMO and progressive regulation, not weak/self-serving proposals for short term measures (super-SEEMP) or ‘research funds’ as are currently being made by industry to the IMO – shipping has long life assets and infrastructure that will lose value rapidly if they don’t become aligned sooner rather than later to the inevitable zero carbon future,” he added.

One naval architect, who it would be fair to say was firmly entrenched on the pragmatic side of the environmental debate, countered that the over-zealous green lobby are seeking to impose such strict regulation on the shipping industry that the industry would be unable to operate within a few years. “We could leave some regions without maritime services as many existing ships would no longer be able to operate,” said the naval architect.

He wanted a more gradual approach to the transition, bringing in regulation as technology, including new vessel design and new fuels became available.

That is not an approach advocated by shipbuilding associations, the Shipyards & Maritime Equipment Association Europe (SEA Europe) along with Community of European Shipyard Associations (CESA) both came down firmly on the side of the green lobby.

Writing before MEPC approved the changes to the Marine Pollution (MARPOL) Convention the two associations were critical; “The proposed level of ambition of the proposed Amendments to the MARPOL Convention is not strict enough to utilize the full reduction potential of, innovative energy-saving technologies and available alternative fuels.”

Existing ships could be retro-fitted to newbuilding standards, “it is technically feasible,” wrote the two associations, and they went on to criticise the two key amendments of MARPOL Annex VI, the Energy Efficiency of Existing ships Index (EEXI) which the shipbuilders said was “not living up to the state-of-the-art in ship technology and will only be applied once.”

In addition, the other major element of the regulatory change, the Carbon Intensity Indicator (CII), was considered to offer uncertain emission savings, “The reduction potential of the new CII is still unclear because no mandatory measures for verification and enforcement have been developed so far.”

Management of the new rules was also considered feeble; “Compliance with reduced CII values is based on the self-assessment of management plans instead of robust corrective measures for sub-standard ships.”

Should the industry be concerned about the shipbuilders’ view, indeed, should wider society be involved in such technical discussions? I’ll let you, the reader, be the judge; “This weak point –if not rectified at MEPC 75– [it wasn’t rectified] will lead to considerable distortion of competition and disadvantage progressive shipowners and shipbuilding companies economically. And this will also undermine the incentive to innovate, which is indispensable for implementing the maritime energy transition and zero-emission maritime transport.”

According to the European shipbuilders the IMO and shipping needs to increase its “ecological payload”.

Failure to achieve that eco-weight-bearing burden, could be interpreted as a conservative move from an overly pragmatic institution. Or it could be construed as the natural view from an industry that reacts to events, rather than pre-empting the future.

Under the previous secretary general, Koji Sekimizu, the IMO had tried to shed its reputation for constantly being behind the curve. Along with industry leaders such as the DNV GL group executive vice president of the time, Tor Svensen, Sekimizu attempted to introduce the idea of proactive regulation.

Svensen argued at the time that the problem with maritime sector was that it reacted to events, rather than trying to identify the weakness in regulations and making changes that would prevent accidents. The policy is dead in the water.

Retrospective regulation remains the norm. However, with climate change there is only one chance to get it right. Governments around the world must react now to turn the proverbial super-tanker away from the rocks. Waiting is not an option.

Or as the contributor to the IMO’s Fourth GHG Study put it;, “The 2020’s are clearly a critical decade for maritime sector i.e shipping and society. We know from the IPCC [Intergovernmental Panel on Climate Change]’s work that we need to approximately halve anthropogenic GHG emissions by the end of this decade. Shipping can ignore the climate science and take a risk of having to decarbonize very rapidly in the 2030’s, or it can be more aligned and in proportion to other efforts to decarbonize. The risks of waiting until the 2030’s is the risk of losing social license to operate and becoming a pariah industry that is increasingly blamed for climate change disasters.”

Failure to introduce robust regulation last week at MEPC 75 has left shipping exposed, and the researcher, argued that this could get worse; “What will IMO include in its revised IMO GHG Reduction Strategy in 2023? If this does not include some more progressive targets, more in line with the climate science, then shipping is on course for achieving pariah status.”

Having seemingly set the wrong tone at MEPC 75, IMO has a little over two years to find the required road to redemption, for the shipping industry, for the IMO and for the rest of us watching the debates. Time is a great leveler. What use will great economic wealth be if the Earth becomes uninhabitable?

Having passed up one opportunity to impose the required regulations, the IMO may get another chance. We won’t know for certain whether that chance will be available until the day approaches. If this was the last opportunity then the IMO and others will look back on this day with great regret and anger.

If, on the other hand, we are afforded another go and IMO takes the progressive route there will be a great communal sigh from the rest of the world, as they exhale, ‘about time’.

47 thoughts on “Maritime sector Is out of step?”