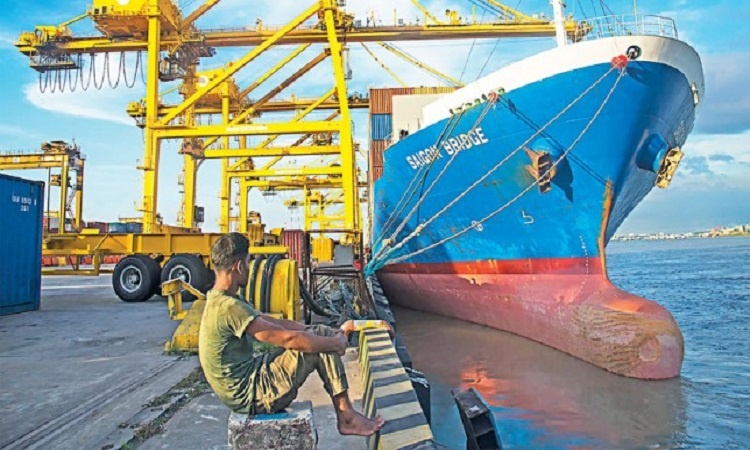 In what can only be considered a rare development, the number of container vessels waiting for berths at the outer anchorage of the Chattogram Port is zero at present.

The current situation comes as a stark contrast to what it was a few months back, when the port was practically choked by acute vessel congestion during the two-and-a-half-month-long nationwide shutdown aimed at curbing the spread of coronavirus within Bangladesh.

A few weeks after the shutdown began on 26 March, the port reached full capacity due to ever-increasing stacks of import containers as most buyers did not accept their deliveries amid the pandemic.

In late April, the number of container vessels parked at the outer anchorage each day reached 36, with most of those ships being stranded there for at least 18 to 20 days before getting berths.

However, the situation improved gradually in the last two months.

“Vessels are now getting berths upon arrival without delay,” said Enamul Karim, director (traffic) of the Chattogram Port Authority.

Three vessels — the Kota Wangsa, Warnow Mate and MCC Cebu — arrived at the outer anchorage on Tuesday and received berths on the very same day.

No vessels were waiting at the outer anchorage on Tuesday or Wednesday, Karim said, adding that such incidents are a frequent occurrence nowadays.

The decline in imports led to a reduction in operating pressure at the port, according to various sources.

Although imports have increased to some extent after the shutdown had ended on 30 May, it is still less compared with previous years, said Ahsanul Huq Chowdhury, chairman of the Bangladesh Shipping Agents Association.

Container movement at the port increased in the first 10 days of August from the month earlier, according to Karim.

“This does not indicate that the pressure of container transport has been reduced.”

The clearing and forwarding agents, who work on behalf of the importers, are currently trying to complete the release procedures at a much faster rate, accelerating the number of deliveries made each day along the way, Karim added.

Most of the importers who incurred huge losses amid the pandemic prefer quick release of their cargoes since they do not want to pay extra storage costs, Chowdhury said.

Besides, the 10 new quay gantry cranes added to the existing four made container handling brisker, allowing ships to depart as soon as possible, according to Karim.

Subsequently, operations can be conducted on time, leading to a lesser number of ships waiting at the outer anchorage.

However, port users want this reprieve from congestion to be sustained.

Due to the existing system, a major portion of the imports is kept under sheds or at yards in the port before they are delivered.

“The port should not become a pseudo warehouse.”

Steps need to be taken so that imported goods can be shifted from the port to other locations for delivery as it would immensely increase the port’s efficiency and capacity, Sujan added.

Currently, 37 various import items are taken to privately owned off-shore docks, from where the cargo is delivered after completing customs procedures.