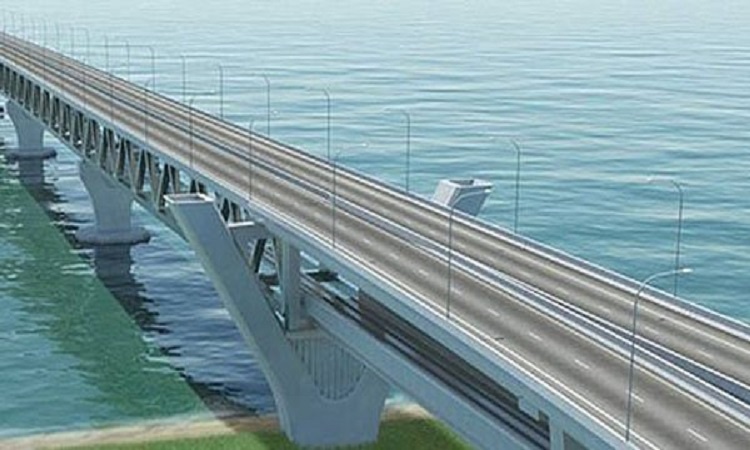 And through this, the whole main structure of this bridge of 6.15 km became visible; A direct road link has been created between the capital and 21 districts in the southern part of the country.

Padma Bridge Executive Engineer (Main Bridge) Dewan. Abdur Quader said that after the construction of the two-storey bridge, preparation of approach road and viaduct, installation of slabs for railways, the dream Padma Bridge will be suitable for vehicular traffic.

Road Transport and Bridges Minister Obaidul Quader has already expressed hope that the bridge will be operational within a year.

There was a festive mood in Padmapara around this Mahendrakshan. Not only the residents of the two banks of the Padma, but also many people from Dhaka came to see for themselves the work of laying the last span of the bridge. They rented boats, trawlers and speedboats and took up positions near the river. They rejoiced when the last span was placed.

Executive Engineer Dewan. Abdur Quader said the 40th span of the Padma Bridge became visible last Friday with the installation of six kilometers. All preparations were made on Wednesday to install the 41st span.

The 150-meter-long span weighing 3,200 tons was carried from the construction yard of Mawar Kumarbhog to the floating crane ‘Tian E’ near the poles 12 and 13. The work of installing the span started at 9 am on Thursday in light fog measuring inches.

As soon as the work was completed at 12:02 pm, the river was connected from Mawa in Munshiganj to Jajira in Shariatpur, said the executive engineer.

Of the 41 spans that are being used to build the entire Padma Bridge, 20 have been installed at the Jazira end, and 20 at the Mawa end. A span sits between the ends of Mawa and Jajira.

As soon as the work of laying concrete slabs on the span of this two-storey bridge is completed, the pitch will be poured. The 22 meter wide bridge will be able to carry vehicles in four lanes. And the train will run in one line through the bottom. Meter gauge and broad gauge trains are being operated on the same line.

Local MP (Munshiganj-2) Professor Sagufta Yasmin Emily said, “By building this bridge with their own funds, the Bengalis showed their capability to the world. At the root of this is the wise decision of Prime Minister Sheikh Hasina. ”

Expressing gratitude to all those who have sacrificed, worked and worked hard for the implementation of this bridge, he said, “The whole nation will enjoy the benefits of this bridge.”

But the implementation of the Padma Bridge project was delayed due to lack of forestry. In July 2010, pre-qualifying tenders for the construction of the bridge were evaluated and five bidders were selected and sent to the World Bank for no objection, but the agency suspended them.

Then the World Bank brought allegations of ‘possible corruption’ in the Padma Bridge. After a long tug of war, Bangladesh said no to the World Bank.

In that tug of war, a minister had to move, while the then bridge secretary had to go to jail in the ACC case. The ACC later gave a final report in the case as the allegations were not true. Allegations of conspiracy to commit corruption have not been substantiated in Canadian courts.

In the end, leaving the design unchanged, Prime Minister Sheikh Hasina announced the construction of the Padma Bridge with her own funds. That huge work started in December 2014.

In December 2015, Prime Minister Sheikh Hasina inaugurated the construction of the main bridge and river governance work. Then on September 30, 2016, the first span was placed on poles number 36 and 38.

The main structure of the 6.15 km long Padma Bridge was constructed by placing 41 spans of 150 m length on 42 pillars. But sometimes if soft soil is found under 22 poles, the design needs to be modified.

The consulting firm later revised the design and decided to extend the pile. It takes extra time about a year. Then the pace of work slowed down between the coronavirus epidemic and the flood. The 32nd span was installed in October after overcoming all obstacles. The rest of the spans are then placed in a short time.

The construction of the main bridge is being done by the Chinese contractor China Major Bridge Engineering Company (MBEC) and the river management is being done by another company of the country, Sinohydro Corporation. Abdul Momen Limited of Bangladesh has constructed two connecting roads and infrastructure.

Sinohydro Corporation is managing the river for the Padma Bridge. As of last November, 8 percent of that work has been completed. In all, the work on the Padma Bridge project was 82.50 percent complete by November.

If this project worth Tk 30,193 crore is implemented, direct communication between the capital and port city Chittagong will be established with Mongla port and Benapole land port. The government expects GDP to increase by 1.2 percent and poverty to decrease by 0.64 percent every year.