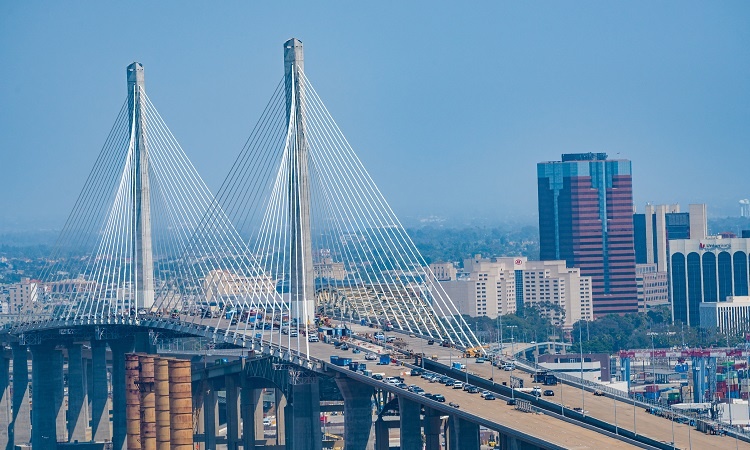 The new bridge at the Port of Long Beach is almost completed and is planned to open to traffic on Monday, 5 October.

The six-lane, cable-stayed bridge will provide a major new regional highway connector as well as improve cargo movement at one of the America’s largest port complexes.

“This new bridge is an incredible icon that will connect Long Beach to the world,” commented Long Beach mayor Robert Garcia. “We will continue to build infrastructure and drive economic growth across the country.”

The new bridge will replace the shorter, narrower Gerald Desmond Bridge, which currently carries 15% of all containerised goods coming into the United States.

The new bridge will provide a higher passage for cargo ships, extra traffic lanes for trucks and cars, emergency lanes, greater resiliency in an earthquake and a 100-year minimum lifespan, according to POLB’s announcement.

With the twin 50-story-high towers connecting 80 cables to the centre span, the new bridge will be one of the tallest cable-stayed bridges in the US and the first of its kind in California.

The bridge project began in 2013 with a major undertaking to clear the path for the new structure. Shortly after the design-build project got underway, state engineers were able to secure additional improvements to the original bridge design to further enhance the bridge’s resistance to a potential future large earthquake.

The US$1.47 billion bridge project also includes the eventual demolition of the existing Gerald Desmond Bridge that is just a few feemetres from the new connection. POLB said that the opening of the new bridge will require a weekend traffic closure from 2 until 4 October in the vicinity in order to switch over lanes to connect both ends of the nearly 3.2km long structure to existing roadways that reach the 710 Freeway, downtown Long Beach and Terminal Island.

Officials have also announced there will be a virtual opening ceremony to be telecast over YouTube and other social media channels, available at www.newgdbridge.com and www.polb.com on Friday, 2 October.

The new bridge is a joint effort of Caltrans and the Port of Long Beach, with additional funding support from the US Department of Transportation and the Los Angeles County Metropolitan Transportation Authority (Metro).

“We are both grateful for the years of hard work by the bridge contractor and workers and for the collaboration with Caltrans to deliver our new bridge,” stated port executive director, Mario Cordero.