Prince Philip’s legacy and memory live on. In honor of what would have been the late Duke of Edinburgh’s 100th birthday — June 10 — the Royal Horticultural Society presented Queen Elizabeth with a very special gift.

The organization — of which the queen is a royal patron — presented her with a newly bred type of rose which they’ve named the Duke of Edinburgh Rose, according to an announcement released by the Palace.

The special rose, which is deep pink in color, was bred from Harkness Roses, and gifted to Queen Elizabeth by Keith Weed, the president of the Royal Horticultural Society. 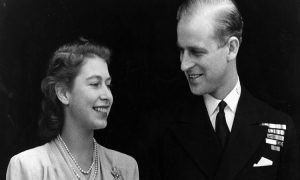 According to the announcement, the commemorative rose has since been planted in the East Terrace Garden at Windsor Castle, along with a mix of other roses in the sprawling layout. The castle’s garden was special to the late duke, who played a large role in its design.

“Whilst being very poignant, it was also a delight to give Her Majesty The Queen, Patron of the Royal Horticultural Society, the Duke of Edinburgh Rose to mark what would have been HRH The Duke of Edinburgh’s 100th birthday and to remember his remarkable life,” Weed said in a statement released by the royal communications office.

Weed added, “The Duke’s devotion to raising public awareness of the importance of conserving the natural world leaves a lasting legacy.”

The Royal Horticultural Society will also be selling the special breed, and part of the proceeds will go to the Living Legacy Fund, which seeks to give young people an opportunity to achieve the Duke of Edinburgh Award.

Philip died on April 9 at his home in Windsor Castle at age 99. According to a statement released by the Palace, he “passed away peacefully” in the morning.

Following his death, the Palace released a touching tribute, sharing a sweet quote from the queen from 1997.

“He has, quite simply, been my strength and stay all these years, and I, and his whole family, and this and many other countries, owe him a debt greater than we would ever claim, or we shall ever know,” Queen Elizabeth expressed at the time.

In late April, a private ceremony was held inside St. George’s Chapel at Windsor Castle and included 30 close members of the royal family in the congregation, including Prince Philip’s son, Prince Charles, as well as Prince William, Kate Middleton and Prince Harry. It was televised both locally in the U.K. and internationally.