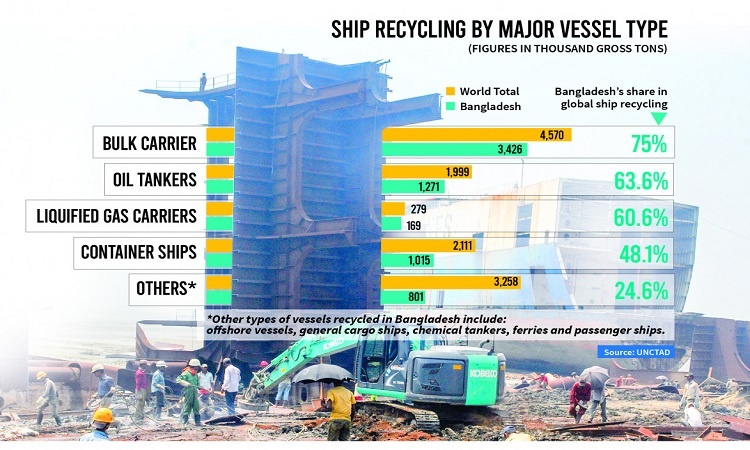 Ship recycling share further increases in Bangladesh. The share in breaking ships, globally, has gone up by around 8%, with the country accounting for more than half the ships dismantled across the world last year, according to a report.

With this improvement, the country has also retained its position, like last year’s, as the largest ship recycler in the world.

In 2019, Bangladesh captured the world market by dismantling around 55% of ships, confirmed the latest report of the United Nations Conference on Trade and Development (Unctad). In 2018, it dismantled over 47% of the globe’s ships.

Industry players have called for the government’s cooperation to retain this upward trend as the shipbreaking industry has started to recover after a long ups and downs.

Around 75% of the world’s bulk carriers, around 64% of oil tankers and nearly 61% of liquefied gas carriers were recycled in Bangladesh in 2019, read the report.

However, global volumes of the recycled tonnage of ships have been on the wane since 2016, said the report.

Further, Unctad projected the volume of international maritime trade will fall by over 4% in 2020 due to the unprecedented disruptions caused by Covid-19.

The report warned new waves of the pandemic are further disrupting supply chains and economies and might cause a steeper decline.

However, Unctad projected maritime trade will recover in 2021 and expand by about 5%.

At the beginning of 2020, the total world fleet amounted to 98,140 commercial ships of 100 gross tonnes and above, equivalent to a capacity of over two billion deadweight tonnage.

In 2019, the global commercial shipping fleet grew by more than 4%, representing the highest growth rate since 2014 but still below the levels it observed during the 2004-2012 period.

China, Japan and South Korea maintained their traditional leadership in shipbuilding, representing over 92% of the new building deliveries in 2019.

Talking about Bangladesh’s progress, Mohammad Abu Taher, president of the Bangladesh Shipbreakers and Recyclers Association, said the government had increased the tax on scrap ship imports by 5% in July 2019 but traders had already imported a lot of ships before the tax hike. As a result, Bangladesh became the largest ship recycler in the world.

Ship recycling share increased as the shipbreaking sector is still one of the key sectors of Bangladesh. This is because the materials required for setting up small and big industrial factories in the country come directly or indirectly from this sector.

Moreover, the sector supplies 70% of the raw materials required for the country’s steel industry, he added.

However, the waste management of shipbreaking yards in Bangladesh is still dependent on their shipyard owners. But in neighbouring India, the government centrally manages the waste through the Treatment Storage and Disposal Facility, he remarked.

Abu Taher regretted that the government gave incentives to most sectors during the Covid-19 pandemic, but excluded shipbreaking. As a result, owners had to pay workers although they were counting losses because scrap trading was closed for a long time.

Ship recycling share increased but most of the yards in Bangladesh are still non-green, which is the biggest hurdle in the shipbreaking yard at the present time. The government should stand by the firms in order to transform the shipyards from non-green to green, he recommended.

To this end, the government should arrange low-cost loans for shipyard owners, Abu Taher said.