On Thursday, the U.S. Department of the Treasury imposed new sanctions on a network of Iranian and Yemeni Petroleum-Smuggling operatives who allegedly run a network of front companies and vessels that are used to smuggle Iranian goods to overseas buyers. At the same time, with far less fanfare, it removed sanctions on two top Iranian oil and gas officials. 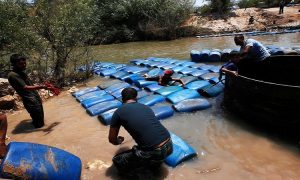 The  Petroleum-Smuggling  network transports Iranian-made fuel, petroleum products and other commodities to countries in the Middle East, Africa, and Asia, Treasury said, and a large share of its proceeds go to the Houthi rebel group in northern Yemen. Other recipients include the U.S.-designated terrorist groups Hizbollah and the Islamic Revolutionary Guard Corps’ Quds Force.

According to the Treasury, a network of businessmen and shipping experts support Sa’id al-Jamal’s operations, facilitating the sale of Iranian goods and the movement of profits to the Houthi movement and the IRGC-QF. Treasury identified these suspects as:

– Hani ‘Abd-al-Majid Muhammad As’ad, a Turkey-based Yemeni accountant affiliated with the Houthis, who manages the network’s Sa’id finances and sends and receive millions of dollars in payments for the operation. As’ad allegedly also handles money transfers to the Houthi movement in Yemen.

– Jami’ ‘Ali Muhammad, a Somali businessman and Houthi and IRGC-QF associate, who has allegedly helped the group to find vessels and complete shipments of Iranian fuel;

On the same day, Treasury lifted sanctions on a set of far-higher-ranking Iranian shipping, oil and gas officials, citing “a verified change in status or behavior on the part of the sanctioned parties.”

The high-level Iranian officials who are no longer sanctioned include Ahmad Ghalebani, the managing director of the National Iranian Oil Company (NIOC), which produces the petroleum smuggled by the Sa’id al-Jamal network and others; and Ahmad Ghalehbani, the head of Naftiran Intertrade Company, a Swiss subsidiary that handles petroleum trading for NIOC.