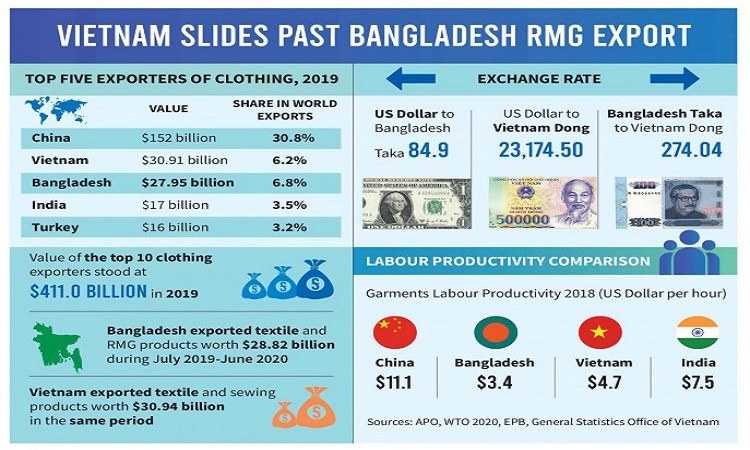 So the inevitable has happened – Vietnam is now the number two apparel exporter in the world, nudging past Bangladesh. Bangladesh ruled the roosts as the world’s number two exporter for quite a long time (although) and it seemed that it’s holding a fortified fort. After all, where else in the world would you get such bountiful cheap labor?

But our policymakers have forgotten that labor is only one component in the production value chain. You may exploit that factor for some time to retain a lead, but then if the other factors remain unchanged, it will ultimately culminate in a losing game. You cannot maintain your competitive edge only by tweaking one factor. Bangladesh’s garment sector is an example.

We can consider quite a few factors that help Vietnam and militate against Bangladesh.

The cost of doing business in Bangladesh is relatively higher than in Vietnam. In the World Bank’s Doing Business ranking, Bangladesh stands at number 168 while Vietnam is set at 70. In none of the indicators could Bangladesh surpass the East-Asian country. The hidden cost and the extra time spent on sending each consignment take toll on our manufacturing cost.

The handling of Covid-19 pandemic is another pointer why Bangladesh has lost its glory.

While Vietnam successfully handled the pandemic by early closure of borders, testing, and lockdowns, Bangladesh remained open until late when the killer germ comfortably slipped into the country, sweeping through every alley and neighbourhood.

Vietnam with 96 million people had only 288 Covid cases and one death.

So, while Vietnam’s factories bounced back early, ours suffered, and so exports also dropped.

And the China factor also played a key role in Vietnam’s glory.

As the second largest economy locked horn with the USA on issues of trade, technology and geopolitics, many Chinese investors knew they need to skirt American embargo and so shifted factories to Vietnam. Although China is at serious loggerheads with Vietnam over the South China Sea, Vietnam did not lose the opportunity to grab in Chinese investment, as it did not hesitate to vigorously trade with its long-time enemy America.

Its signing of free trade agreement with the EU only gave a fillip to its investment.

Bangladesh garment industry is also hobbled by a lack of product diversification both horizontally and vertically. We still produce a few products of little value and profit. Even within that small product range, we could not diversify and really explore the depth of each vertical.

Only recently with the pandemic, Bangladesh is slowly entering into medical clothing segment. But it still is far behind in technical and smart clothing items.

Vietnam has diversified its product range on a wider spectrum, giving it cushion and comfort.

Bangladesh’s exports were also particularly hurt by an appreciated taka. While the market should have been allowed to let taka sink, it was held high while Vietnam’s currency had depreciated.

Its currency dong had fallen to a historic low last year and was again depreciated in February this year, giving Vietnam an extra edge over Bangladesh.

And lastly, Bangladesh is still far behind in production efficiency compared to Vietnam. This has happened because of a lack of infusion of technology, supply chain efficiency, efficient manpower and other factors.

As a cumulative result of all this, we now know that Bangladeshis are going to Vietnam to work in garment factories there because Vietnam has a crisis of manpower.