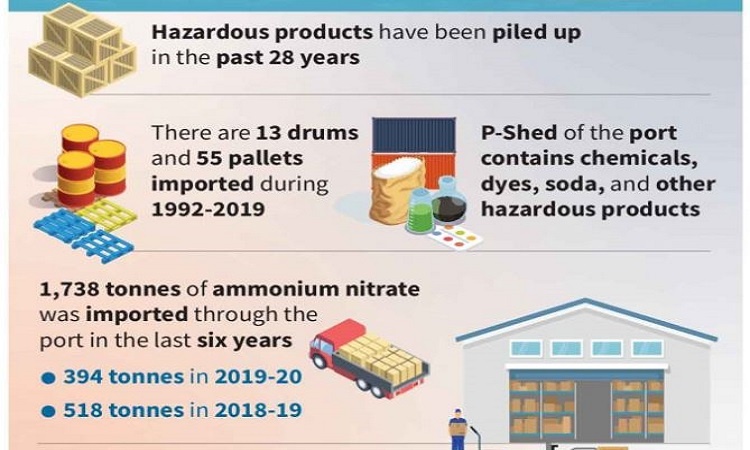 Chattogram port and customs authorities have taken initiative to remove hazardous products including chemicals that have been piled up at the port in the last 28 years.

On August 9, they formed a six-member probe committee led by M Safiul Bari, a member of the port (Harbor and Marine), in this regard.

The committee was directed to submit its report to the chairman of Chattogram Port Authority (CPA) within the next seven working days. Member of Chattogram port (Administration and Planning) Zafar Alam told The Business Standard, “Hazardous products including chemicals have been stuck in the port for a long time as the importers did not unload the goods on time. Such a situation would not have arisen if the customs authorities had sold these products at auction or destroyed the expired products.”

A massive fire incident, which occurred on July 15, at shed number three of the port, made the authorities concerned of Chattogram port panicked. There were various products including chemicals, clothes and machinery products for auction in that shed, which were imported 33 years ago.

The fire had been brought under control after four hours. An investigation committee had been formed headed by Zafar Alam. The committee could not submit a probe report till Wednesday (August 12).

Chattogram port sources said various chemicals and hazardous products imported at the Chattogram port are kept in the P-Shed of the port. At present, the P-Shed has 13 drums and 55 pallets. These were imported between 1992 and 2019.

In accordance with the policy of the International Shipping Organization, flammable and explosive materials like ammonium nitrate have to be transported by sea. There are also provisions for storing and transporting these products in the country.

“These provisions are not complied with when these products would be transported from the port by road,” said a senior official of the port.

M Safiul Bari, a member (Harbor and Marine) of CPA and convener of the committee formed to know the location of the chemical and hazardous products, said, “There is an ‘International Maritime Dangerous Goods Code or IMDG Code’ framed by the International Shipping Organization for dangerous goods. It has a list of nine categories of products. It contains explosives, hazardous gases, flammable liquids and solids, toxins, radioactive and oxidants.”

“Such products are usually delivered from the port within four days. The P-Shed at the Chattogram Port contains chemicals, dyes, soda and hazardous products. The committee is working to determine the number of products,” he added.

Seeking anonymity, an official of the port told The Business Standard, “Hazardous products including chemicals have separate storage facilities. The P-Shed of the port is not managed accordingly. We are deeply concerned about the dangerous products that have been left behind, after the incident of Beirut.”

Deputy Commissioner of Chattogram Customs House’s Auction Branch said, “Work is underway to determine the list of dangerous products kept in the P-Shed of Chattogram port. These products will be put up for auction soon. Besides, steps will be taken to destroy expired products.”